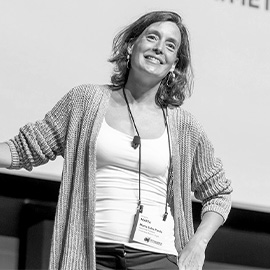 Marta Sales-Pardo graduated in Physics at Universitat de Barcelona in 1998 and obtained a Ph.D. in Physics from Universitat de Barcelona in 2002. She then moved to Northwestern University, where she first worked as a postdoctoral fellow and, later, as a Fulbright Scholar. In 2008, she became a Research Assistant Professor at the Northwestern University Clinical and Translational Science Institute with joint appointments in the Department of Chemical and Biological Engineering and the Northwestern Institute on Complex Systems. In 2009, she accepted her current position as in the Departament d’Enginyeria Química at Universitat Rovira i Virgili. In 2013 she received an ICREA Acadèmia Award for excellence in research.