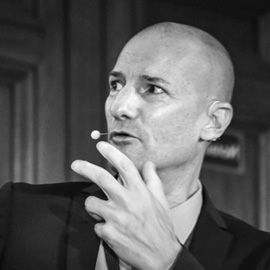 Jan Walleczek Ph.D. is Director of the Fetzer Franklin Fund, and a Trustee of the John E. Fetzer Memorial Trust. He lives in Berlin, Germany, where he founded Phenoscience Laboratories. Previously he was Director of the Bioelectromagnetics Laboratory at Stanford University Medical School, Palo Alto, California. Jan Walleczek studied biology at the University of Innsbruck in Austria, followed by doctoral work at the Max-Planck-Institute for Molecular Genetics in Berlin, and post-doctoral work at the Research Medicine and Radiation Biophysics Division of the Lawrence Berkeley National Laboratory, University of California at Berkeley.

His research interests are diverse, and his scientific publications cover the fields of biology, chemistry, engineering, and physics. His work focuses on the foundations of quantum mechanics and the application to living systems of concepts such as quantum coherence, emergent dynamics, and the flow of information, a long-standing interest that he summarized as an edited volume for Cambridge University press titled “Self-organized biological dynamics and nonlinear control”. In addition to metascience and advanced research design, his professional interests include the philosophy and the foundations of science.

Counterfactual Meta-Experimentation and the Limits of Science: 100 Years of Parapsychology as a Control Group

Towards Ontology of Quantum Mechanics and the Conscious Agent

Free Will Theorems in Nonlocal Information Transfer without Nonlocal Communication

Is the World Local or Nonlocal? – Towards an Emergent Quantum Mechanics 80 Years after EPR

Does Epistemic Non-Signalling Ensure the “Peaceful Coexistence” of Special Relativity and Quantum Nonlocality?

EmQM15 – Is the World Local or Nonlocal? – Towards an Emergent Quantum Mechanics 80 Years after EPR

EmQM15 – Is the World Local or Nonlocal? – Towards an Emergent Quantum Mechanics 80 Years after EPR