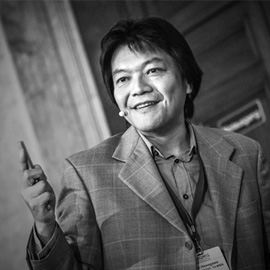 Yuji Hasegawa is working right now at the Atominstitut der Österreichischen Universitäten, Wien. His group is engaged in quantum optical experiments with neutrons. He studied Applied Physics at the University of Tokyo, Japan and then moved in Wien between 1991 and 1992 as exchange student between TU Wien and the University of Tokyo. During his exchange in Wien, he joined the group of Prof. Rauch´s neutron interferometer at the Atominstitut.
Coming back to Tokyo, he ended his Ph.D. about interference experiments using high-energy photons, x-rays from synchrotron radiation, and neutrons.
He became a Postdoc at the University of Tokyo and constructed a precise neutron optics (PNO) beam-line at the JRR-3M, Japan Atomic Energy Research Institute (JAERI), Tokai, Japan.