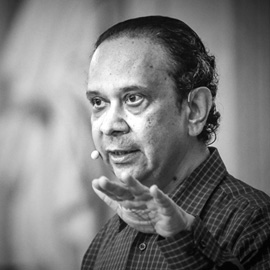 Professor Thanu Padmanabhan is an internationally acclaimed Theoretical Physicist and Cosmologist whose research spans a wide variety of topics in Gravitation, Structure formation in the universe and Quantum Gravity. He has published more than 240 papers and reviews in international journals and nine books in these areas. Many of his contributions, especially those related to the analysis and modeling of dark energy in the universe and the thermodynamics of spacetime horizons, have made significant impact in the field.
He was honoured with a Padma Shri by the President of India in 2007.
Born in 1957, Padmanabhan took his B.Sc. and M.Sc. degrees in Physics from Kerala University and was a Gold medallist in both. Subsequently he joined TIFR, Mumbai where he did his Ph.D. in Physics. He held various positions at TIFR during 1980-1992 and also spent a year (in 1986-87) at the Institute of Astronomy, Cambridge for his postdoctoral research. He moved to the Inter-University Centre for Astronomy and Astrophysics (IUCAA), Pune in 1992 and became Dean, Core Academic Programmes of that Centre in 1997, which is the position he is currently holding. He has been a visiting faculty at several places abroad including Caltech, Princeton University and Institute of Astronomy, Cambridge.
Professor Padmanabhan has received numerous awards and distinctions in India and abroad for his contributions. These include Young Scientist award (INSA), Shanti Swarup Bhatnagar Award (CSIR), The Millennium Medal (CSIR), G.D. Birla Award, INSA Vainu-Bappu Medal, Homi Bhabha Fellowship, J.C. Bose National Fellowship (DST), Infosys Prize for Physical Sciences (2009) and Third World Academy of Sciences Prize in Physics (2011) among others. He is an elected Fellow of all the three Academies of Science in India and the Third World Academy of Sciences. The international distinctions received by him include the position of Sackler Distinguished Astronomer from the Institute of Astronomy, Cambridge, the Al-Khwarizmi International Award and the Miegunah Fellowship of the University of Melbourne. He was the elected President of the Cosmology Commission 47 of the International Astronomical Union (2009-12) and is the Chairman of the Astrophysics Commission of the International Union of Pure and Applied Physics. His research has won prizes from the Gravity Research Foundation, USA seven times in the past including the First Prize recently in 2008.
He has authored nine books out of which seven have been published by Cambridge University Press (CUP). His book Structure Formation in the Universe [1993; CUP] has been recognized as a classic in the field and his recent three-volume treatise on Theoretical Astrophysics [2000-2002; CUP] has been widely acclaimed as an authoritative textbook. These books are used extensively in several universities and institutions all over the world as graduate level textbooks. Padmanabhan is also actively involved in the popularization of science and has authored more than a hundred articles published in Indian and international journals. His popular science book After the first three minutes [2000; CUP] has been translated into Portuguese, Chinese and Polish.
Another work of his, The story of physics, published by Vigyan Prasar, Delhi has been translated into several Indian regional languages.

Atoms of Spacetime and the Nature of Gravity

EmQM15 – Atoms of Spacetime and the Nature of Gravity

EmQM15 – Atoms of Spacetime and the Nature of Gravity