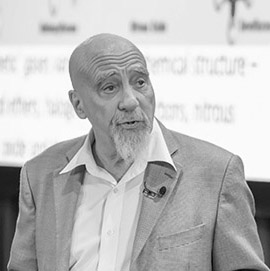 Stuart Hameroff MD grew up in Cleveland, Ohio, working summers at Republic Steel and Cleveland Stadium. At the University of Pittsburgh in the late 1960s, he studied chemistry, physics, mathematics and philosophy of mind. In medical school in the early 1970s at Hahnemann Medical College in Philadelphia, Hameroff spent a summer in a cancer research lab. Studying mitosis, he became interested in mitotic spindles and centrioles, composed of microtubules, polymers of the protein ‘tubulin’, and major components of the cytoskeleton within all cells. Comparing their lattice structure to Boolean computer matrices, he proposed that microtubules were the source of biological intelligence, and perhaps consciousness. Choosing an academic career, Hameroff trained in anesthesiology at the new University of Arizona Medical Center in Tucson, mentored by the department of anesthesiology’s founding chair, Dr Burnell Brown Jr, MD, PhD. After residency, Hameroff joined the anesthesiology faculty in 1977, a position he still holds as emeritus professor and practicing anesthesiologist.

In the mid 1990s Hameroff teamed with famed British physicist Sir Roger Penrose to develop a quantum theory of consciousness (‘orchestrated objective reduction’, ‘Orch OR’) based on microtubule quantum computing. Highly controversial and harshly criticized, Orch OR is now supported by evidence, e.g. that anesthetics act in quantum channels in microtubules, and that microtubules have multi-scalar resonances, e.g. in megahertz. Hameroff and Penrose wrote a 20 year review of Orch OR in 2014.

Beginning in 1994, with professor and former department head Al Kaszniak in Psychology, the late professor Alwyn Scott in mathematics, and subsequently philosophy (and Regents) professor David Chalmers, Hameroff started an interdisciplinary, international conference series ‘Toward a Science of Consciousness’ held in even-numbered years in Tucson, and odd-numbered years elsewhere around the world. April 2014 marked the 20 year anniversary ‘Tucson’ conference, and the 2015 conference will be in in Helsinki, Finland in June.

In 1998, with Kaszniak and Scott, and a 1.4 million dollar grant from the Fetzer Institute, Hameroff co-founded the University of Arizona Center for Consciousness Studies (CCS), served as associate director, and succeeded Kaszniak and then Chalmers, as director in 2004. With CCS moving administratively to anesthesiology, and Abi Behar-Montefiore as assistant director, CCS has subsisted since 2004 entirely on conference registration fees and small grants, and has supported relevant research.

Hameroff also collaborates with professors Jack Tuszynski at the University of Alberta, and Travis Craddock at Nova Southeastern on molecular modeling of microtubules, memory via CaMKII phosphorylation, and non-polar anesthetic and psychoactive drug actions in microtubule ‘quantum channels’. Quantum non-locality implied for consciousness has attracted interaction with Deepak Chopra, and the inaugural ‘Rustum Roy’ award in 2011.

Hameroff has written or edited 5 books, over a hundred scientific articles and book chapters, lectured around the world, and appeared in the film ‘WhattheBleep?’ and numerous TV shows about consciousness on BBC, PBS, Discovery, OWN and History Channel.

(source: The University of Arizona)