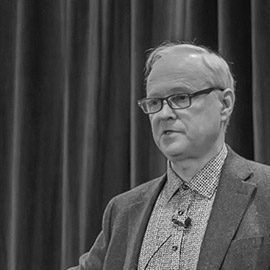 His main research areas are philosophy of mind, philosophy of physics and their intersection. The central problem in philosophy of mind is how to understand the place of mind – and especially conscious experience – in the physical world. Pylkkänen has explored whether this problem can be approached in a new way in the framework of the new holistic and dynamic worldview that is emerging from quantum theory and relativity. He has in particular been inspired by the physicists David Bohm and Basil Hiley’s interpretation of quantum theory and has collaborated with both of them.

In his 2007 book Mind, Matter and the Implicate Order (Springer) he proposed that Bohmian notions such as active information and implicate order provide new ways of approaching key problems in philosophy of mind, such as mental causation and time consciousness. The overall aim of his research is to develop a scientific metaphysics. Paavo Pylkkänen has been a visiting researcher in Stanford University, Oxford University, London University, Charles University Prague and Gothenburg University and is a member of the Academy of Finland Center of Excellence in the Philosophy of Social Sciences (TINT).

The quantum potential – classical or something entirely new?