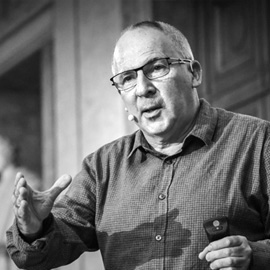 The main research of Lev Vaidman is in the fields of Foundations of Quantum Mechanics and Quantum Information.

Most of his works belong to theoretical physics, but he also performs some experimental work in quantum optics and writes philosophical papers on the many-worlds interpretation of quantum mechanics.

In the area of Quantum Information he invented a secret key distribution with quantum particles in orthogonal states (the Goldenberg-Vaidman protocol), quantum gambling, and practically secure bit commitment.

The main tool of his research is the analysis of paradoxes such as the 3-box paradox, the paradox of a photon being at a place through which it cannot pass and more. The Paradoxes help him achieve the goal of deeper understanding of locality and randomness in Nature.

Ontology of the wave function

EmQM15 – Ontology of the wave function

EmQM15 – Ontology of the wave function

When Photons Are Lying about Where They Have Been