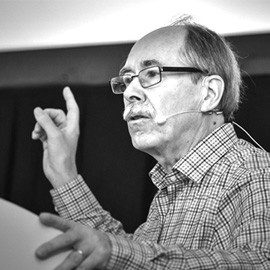 His work concentrates on gauge theory, black holes, quantum gravity and fundamental aspects of quantum mechanics. His contributions to physics include a proof that gauge theories are renormalizable, dimensional regularization, and the holographic principle. After obtaining his doctorate 't Hooft went to CERN in Geneva, where he had a fellowship. He further refined his methods for Yang–Mills theories with Veltman (who went back to Geneva). In this time he became interested in the possibility that the strong interaction could be described as a massless Yang–Mills theory, i.e. one of a type that he had just proved to be renormalizable and hence be susceptible to detailed calculation and comparison with experiment.

According to his calculations, this type of theory possessed just the right kind of scaling properties (asymptotic freedom) that this theory should have according to deep inelastic scattering experiments. This was contrary to popular perception of Yang–Mills theories at the time, that like gravitation and electrodynamics, their intensity should decrease with increasing distance between the interacting particles; such conventional behaviour with distance was unable to explain the results of deep inelastic scattering, whereas 't Hooft's calculations could. When he mentioned his results at a small conference at Marseilles in 1972, Kurt Symanzik urged him to publish this result. He did not, and the result was eventually rediscovered and published by Hugh David Politzer, David Gross, and Frank Wilczek in 1973, which led to them earning the 2004 Nobel Prize in Physics.

How quantization of gravity leads to a discrete space-time

Physics on the Boundary between Classical and Quantum Mechanics

EmQM15 – How quantization of gravity leads to a discrete space-time

EmQM13 – Physics on the Boundary between Classical and Quantum Mechanics

EmQM15 – How quantization of gravity leads to a discrete space-time

EmQM13 – Physics on the Boundary between Classical and Quantum Mechanics