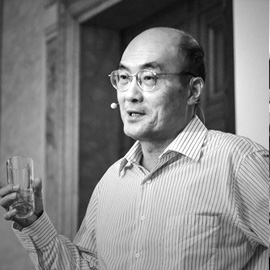 Prof Bei-Lok Hu got his PhD in theoretical physics from Princeton University in 1972 under the late Professor John A. Wheeler. After postdoctoral work at Stanford University, University of California, Berkeley and Santa Barbara in mathematics, physics and astrophysics, he was appointed an honorary research fellow at Harvard University in 1979 before he assumed his current position at the University of Maryland in 1980.

Prof Hu's research in the 70's was on quantum field theory in curved spacetime with applications to quantum processes in the early universe, for that work he was elected Fellow of the American Physical Society. Professor Hu began pioneering work on nonequilibrium quantum field theory in the 80's which resulted in a book with Dr. Calzetta by this title published in 2008 in the Cambridge Monograph in Mathematical Physics series. In 1990 Prof Hu began his seminal work on quantum decoherence and non-Markovian processes of open quantum systems. Since 2000 he has been studying quantum entanglement dynamics in atomic-optical systems with applications to quantum information processing. He is a founding fellow of the Joint Quantum Institute dedicated to the advancement of quantum science and its applications. He is also the chief architect in the inauguration of the International Society for Relativistic Quantum Information in 2010. His current research interest is on foundational issues of quantum and statistical mechanics behind macroscopic quantum phenomena and quantum thermodynamics.

Prof Hu is a world-renowned leader in quantum gravity research. His long-held critically independent viewpoint that general relativity is a hydrodynamic theory first presented at the Second Sakharov Conference in 1996 has, alongside with his Maryland colleague Jacobson's 1995 paper on viewing Einstein's equation as an equation of state, as well as work from the condensed matter community by Volovik and Wen, helped ushered in a vibrant field known today as emergent gravity.