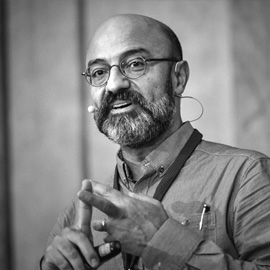 Professor and Associate Chair of Physics Ariel Caticha strongly believes that “physics is learned by doing.” To encourage students to join him on his voyage of discovery, the scholar – internationally recognized for his work on a “theory of X-ray and neutron scattering by thin film multilayers” and “capillary waveguides for soft X-rays and neutrons” – makes himself accessible to his undergraduate and graduate students both inside and outside the classroom.

Caticha is also noted for his enthusiasm and for his ability to convey subtle concepts. These talents, combined with his accessibility, consistently earn him high marks from students who evaluate his teaching.

To date, Caticha has mentored six students toward their doctoral dissertations. In addition, he has served as a reviewer of National Science Foundation research grant proposals. The author of numerous peer-reviewed and invited articles, Caticha also referees such scientific journals as Physical Review Letters, Journal of Physics, and Journal of the Optical Society of America.

Trading drift and fluctuations in entropic dynamics: a new symmetry for quantum mechanics

Entropic Dynamics: an Inference Approach to Time and Quantum Theory