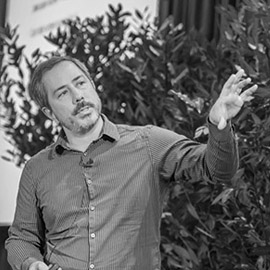 Anthony Aguirre is a professor of physics at the University of California, Santa Cruz, and the associate scientific director of the Foundational Questions Institute, a nonprofit organization that he co-founded and co-runs.

He received his doctorate in astronomy from Harvard University in 2000 and then spent three years as a member of the Institute for Advanced Study in Princeton before accepting a professorship in the physics department of the University of California, Santa Cruz.

He has worked on a wide variety of topics in theoretical cosmology (the study of the formation, nature, and evolution of the universe), including the early universe and inflation, gravity physics, first stars, the intergalactic medium, galaxy formation, and black holes.

Observer-dependent entropy and the Second Law