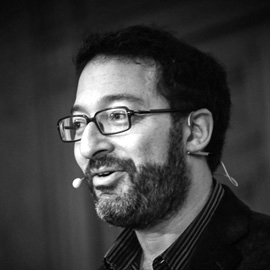 Aephraim Steinberg is a Professor in the Department of Physics at the University of Toronto.  He is also a founding member of Toronto's Institute for Optical Sciences, a member and past director of the Centre for Quantum Information and Quantum Control (CQIQC), an affiliate member of the Perimeter Institute for Theoretical Physics and a principal investigator in Photonics Research Ontario, the Canadian Institute for Photonic Innovations, and QuantumWorks.

Dr. Steinberg received his undergraduate degree from Yale University in 1988 and his Ph.D. from the University of California at Berkeley in 1994.  He then held post-doctoral fellowships at the Université de Paris VI and the U.S. National Institute of Standards and Technology before moving to Toronto in 1996.  He has been a guest professor at the University of Vienna; the Institut d'Optique Théorique et Appliquée in Orsay, France; and the University of Queensland in Australia.

In 2006, he received the Canadian Association of Physicists Herzberg Medal and the Rutherford Medal in Physics from the Royal Society of Canada.  In 2007, he received a Steacie Fellowship from NSERC, and a McLean Fellowship (Connaught Foundation, University of Toronto).  He is a Fellow of the Institute of Physics (UK), the American Physical Society, and the Optical Society of America.

Dr. Steinberg’s interests lie in fundamental quantum-mechanical phenomena and the control & characterization of the quantum states of systems ranging from laser-cooled atoms to individual photons.  His experimental program is two-pronged, using both nonclassical two-photon interference and laser-cooled atoms to study issues such as quantum information & computation, decoherence and the quantum-classical boundary, tunneling times, weak measurement & retrodiction in quantum mechanics, and the control and characterization of novel quantum states.