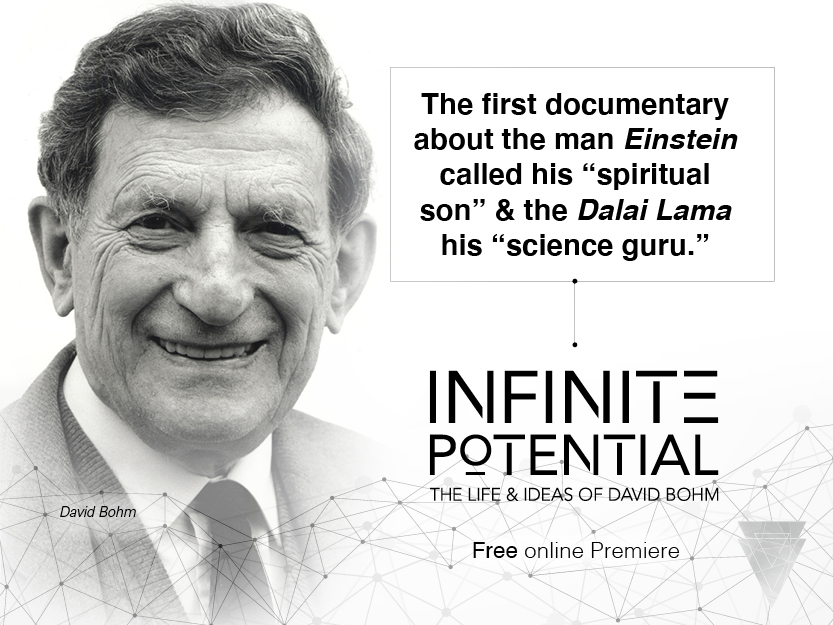 Three years ago, on the occasion of the 100th Birthday of David Bohm, the Fetzer Franklin Fund organized the Emergent Quantum Mechanics Symposium (EmQM17) at the University of London. The Centennial Symposium explored the possibility of an ontology for quantum mechanics, an approach which David Bohm helped pioneer, and which focussed on interconnecting three fields of knowledge: emergence, the quantum, and information. This was the starting signal not only for a new discussion about David Bohm’s radical ideas but also for a collaboration of the Fetzer Franklin Fund with Filmmaker Paul Howard for producing a documentary about the life and ideas of David Bohm, including his unique vision of the meaning and wholeness of the universe.

It is the first documentary about David Bohm, the man who studied with Robert Oppenheimer, whom Einstein called his “spiritual son” and the Dalai Lama his “science guru.” He developed an alternative quantum interpretation based on hidden variables that are nonlocal. A controversial, yet much debated, theory which also supports the vision of the deep interconnectedness of the world. Less known is Bohm’s idea of the Implicate Order, which this film seeks to introduce to a wider audience.

A very special group of scientists, philosophers, scholars, colleagues and friends were interviewed for this documentary, including the Dalai Lama, Sir Roger Penrose, Sir Antony Gormley, and physicist Basil Hiley.

The online world premiere will take place on the 20th of June 2020. The event will be livestreamed on YouTube at noon Pacific Standard Time, featuring a live Q & A with the film's director, Paul Howard, along with scientists and Bohm-collaborators interviewed in the film.