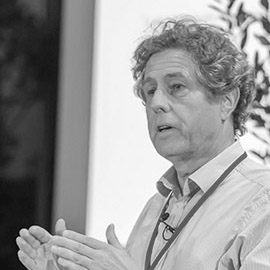 Tim Palmer is an internationally renowned meteorologist with a particular interest in the predictability and dynamics of the weather and climate.

Tim’s work has led to the development of probabilistic techniques to forecast weather and climate, and he has applied this to disease and crop yield prediction and more. His techniques have been implemented by the Met Office and the European Centre for Medium-Range Weather Forecasts, amongst others. Tim’s work is theoretical as well as practical. His recent research exploits ideas in imprecise computing to develop computer simulations of weather and climate at very high resolution. His opinion is highly regarded at an international level through serving on multiple government advisory committees and contributing to all reports conducted by the Intergovernmental Panel on Climate Change.

He was appointed as CBE in the 2015 New Year’s Honours list for services to science. Tim has won numerous awards from organisations such as the American Meteorological Society and the Institute of Physics. Remarkably, he also retains an active interest in his original doctorate topic, fundamental physics.

Does Bohmian Theory Have to Be Nonlocal? New Directions for Analysing the Bell Theorem